Please note access to the David Mzuguno Tribute opening on 6th April, or visit of the exhibition, is reserved to European Commission Members or Staff. Please send your name and email if you wish to request an access badge to see the show before 31st March to : info@lumieresdafrique.eu 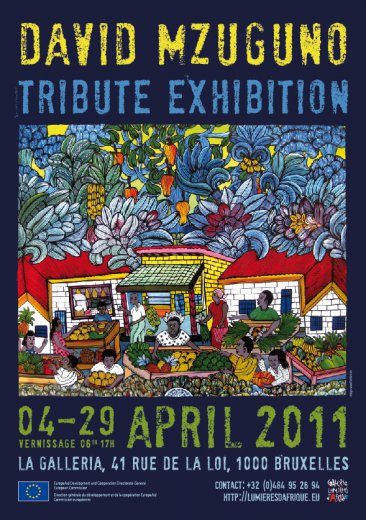 David Mzuguno was born near the city of Same, Pare district, Kilimanjaro region, in 1951 ; in 1967, He arrived in Dar-es-Salaam and started painting (in a realistic style) while completing his Secondary Education up to Form 4 (1972)

In 1969, he had won the 3rd prize of the Esso Calendar Competition but after finishing his education he decided to start working as a mining prospector (1973-79)

When he stopped working as a prospector in 1979, he committed himself to painting full-time, giving up his figurative style of paintings for a more naïve style, he became a member of the Tingatinga Centre until 1989, date when he decided to pursue his solo career from his home studio outside Dar-es-Salaam.

He has a considerable record of solo and group exhibitions, and in 2009 he was officially invited for two months in China as a resident artist. He sadly passed away in 2010 and the purpose of this exhibition is to pay tribute to the work of an artist with a real creative genius, one of Africa’s greatest artists, and a man who inspired many of the young painters of the current generation of Tingatinga painters.

David Mzuguno was born in the Kilimanjaro Region and completed primary school in 1967. He was painting from an early age. He moved to Dar-es-Salaam to stay at his uncle’s, where he attended secondary school, which included art subjects. He lived near the Morogoro stores, where the Tingatinga painters were concentrated and had their collective workshop based. Each day, on his way to school and back, he was often sharing jokes with the artists and sometimes making fun of them because of their non-realistic style.

After completing secondary school in 1972, Mzuguno worked as a mining prospector from 1973 until 1979. Meanwhile, he continued selling his paintings in hotels. In 1979 Mzuguno decided to drop his realistic style of paintings in favour of the Tingatinga style, which was much more successful at the time, and he joined the Tingatinga Partnership. The Tingatinga artist Mruta accepted him as member n°42 of the Partnership.

David Mzuguno stayed in the Tingatinga Arts Cooperative Society until 1989. He was selling more than the other painters, partly because he could speak English fluently with the customers, and partly because of his unique style, that no other painter in the Tingatinga collective ever attempted to imitate. When he left, he spent the next couple of years painting for a Japanese woman, who was a guest at the Dar-es-Salaam University. Thereafter, Mzuguno pursued his career, painting at his home in Mlandizi, at about 60km from the city centre.

Mzuguno’s work demonstrate great originality in depicting scenes of lush vegetation with almost eccentric imagination. The richness of nature so obvious in his paintings speaks of his roots in the Kilimandjaro Region, and though he was known to be restless and travelled extensively through Tanzania’s very different and often dry regions, it is nearly always an exuberant and sumptuous flora that is depicted in his paintings. Having said that, Mzuguno has also effortlessly created original works in the more “popular” style, showing crowded urban African environments and chaotic places such as Kariakoo Central Market in Dar-es-Salaam.

With his swirling landscape style, Mzuguno has taken the Tingatinga style in a new direction.

Unlike many Tingatinga painters who borrow from each other’s motifs and styles, Mzuguno’s style is uniquely his own and generally not copied by others. He has trained two young family members who have assisted him in his paintings.

In December 2003, Mzuguno held a solo exhibition at the Alliance Française in Dar-es-Salaam. In 2009, he participated in a two-month residency program at Shenzhen Fine Art Institute in China, organized by the Ministry of Culture, together with four other African artists. Less than a year ago, at the beginning of 2010, he had a very successful exhibition at the International School of Uganda (Entebbe Rd.) in Kampala, Uganda. The exhibition turned out to be an overwhelming success. An enormous group of art lovers attended the opening event and lots of individuals frequented the exhibition in the following weeks. The show was widely covered in the Ugandan press and was regarded , by the artist himself, as the biggest, most rewarding and most comprehensive ever dedicated to his work.

The spotlights were on David Mzuguno, who at that point was widely regarded as the finest, greatest and “last living Master Tingatinga painter” of Tanzania. His art career spanned many decades and his international breakthrough was, a year before the ISU exhibition took place, nothing less than a fact.

The Tingatinga style David Mzuguno’s work is rooted in the “Tingatinga style”, a distinct form of naïve paintings started by Eduard Saidi Tingatinga, the man who introduced naïve paintingsto Tanzania, in 1968. Tingatinga himself probably had the shortest possible career in the history of art since he only painted for four years. He was accidentally shot by the police in 1972, but the four apprentices he had formed carried on their work, passing on to the next generation up to the present situation were around 400 to 500 painters have adopted this livelihood and help keeping alive that vibrant and exotic style. Hundreds of them are merely “bread painters” and only a handful have managed to separate themselves from the crowd, and gained international acclaim.

One of them is Mohamed Charinda, acquired by the British Museum, in London. George Lilanga, who passed away in 2005 is undoubtedly the most famous ever, a key artist in the Jean Pigozzi Collection of African Contemporary Art, the collector has hundreds of paintings by the late Lilanga, and recently sold the rights to one of his paintings to Hermes, who used it to reproduce on a silk scarf, their flagship “Carré” by Hermes. The style recently gained importance and added visibility on the international art market. A Tingatinga style painting by the late artist Rajabu Chiwaya was sold at an auction in Paris some weeks ago, and sold for 51,000 USD.

Apart from George Lilanga, Damian Msagula, who also passed away in 2005, was another great artist although more ambiguous. But these great characters added artistic personality and a highly individual expression to the style, and were, like Mzuguno himself, true Masters of Tingatinga. Mr. Pascal Bogaert, ISU Visual Arts teacher in Kampala, quotes :

“We were all honored to witness one of the most impressive contemporary African art treasures ever seen, at ISU’, ‘The Last living Master Tingatinga painter’. There were paintings of all sizes and colors. Elephants roaming through Eden’s garden. Traditional villages hidden in tropical jungles, its inhabitants living in perfect symbiosis with their natural surroundings. Sensual zebras in love under trees filled with the brightest colored peacocks. Breathtaking views of mighty Mount Kilimanjaro. Lions staring at the viewer from a kaleidoscopic jungle forest, wildly decorated with an explosion of life-forms. Jungle scenes in rich gradations of yellows, oranges and greens, adorned with sunflowers in the most complex, yet stunningly beautiful painted composition schemes, wild, warm and organic, like the tropical forest itself. Everyone loved the masterpieces that showed Africa’s wildlife in all its glory.

Each single piece was a mad, abundant celebration of bio-diversity and electrifying natural energy, a refined artistic ode to the universal thirst for life and an embracement of pure naïve joy. It seemed as if a divine creative whirlwind had guided David’s brush over the canvas, in order to visualize for us mortals, the fresh primordial energy beaming straight from the inner depths of Mother Earth.

It was clear that he lavished his artistic thirst from a never ending source of creativity and it just blew every single one of us away. No wonder all his works got sold, most of it even before the exhibition had officially opened. Uganda loved him”

David, sadly enough, suffered from lung cancer and wasn’t even aware of his illness. He passed away in June 2010, shortly after the ISU Exhibition.